Avalon Chronicles #74: "Reflection, Renewal., and Resolutions in the New Year"

Avalon Chronicles #74: "Reflection, Renewal, and Resolutions in the New Year"

by Allen B. Clark

It was several years ago that I placed on my lay ministry web site (above) what for me was a summarized view of my faith walk and its practical application derived as a sum total of decades of prayer, study, and reading of dozens of books.
On the occasion of the eve of a New Year it is an appropriate time to Reflect, Renew, and Resolve.
In Reflection, allow me to give thought to what we know to be our tripartite self:  Body, soul, and spirit. Our soul consists of our mind, emotions, and will and suffers torments due to outside influences from others, personal situations, or worldly conditions. However, there is a significant amount of torments of the soul over which we have complete personal control. Allow me to render proper credit to the now-deceased Nancy Missler and her teachings for the following concept. A major secret to success in reducing the torments of the soul is T.E.C.A.C.. She taught that, if one controls the mind through our Thoughts, then the Emotions can be restrained so that one may exert the will to make wise Choices of Actions to provide Consequences that in more cases than not will be positive rather than negative and provide us peace and tranquility.
This is not easily-accomplished. However, through the personal discipline of constant spiritual Renewal, we are reminded that blessings from our Lord emanate primarily due to living a pure and clean life. This state is achieved by true repentance and confession of sins and forgiveness of all others plus ourselves, which lays the foundation for constant spiritual renewal.
In the upcoming New Year the following are worthy spiritual Resolutions:

4. "So determine in your heart today to be loyal to God in every word you speak." (Faith April 4)

REMEMBER: "Sin Shatters the Strength of the Spirit"

Avalon Chronicles #73: "Battlefields: Then and Now"

Avalon Chronicles #73: "Battlefields: Then and Now"

Iraq: Ur, Nuzi, and Nineveh

Ur: Then. There is disagreement among scholars as to the exact location of "Ur of the Chaldeans," Some theorize that Abraham traveled to Canaan from a location in the north of Mesopotamia. It appears that this location is more geographically feasible for Abraham's trek. However, another very interesting Ur is in the southeastern part of Iraq. It is an ancient Sumerian temple site, possibly 4000 years old. It is 200 miles south of Baghdad. The founder of the Third Dynasty of Ur, Ur-Nammu, built the Great Ziggurat of Ur in approximately 2100-2000 BC. This Ur became the capitol of Mesopotamia. The remains were first discovered in 1850. In the 1960s and 1970s the Ziggurat began to be reconstructed by the Iraqi Department of Antiquities.

Ur: Now. These two photos were taken and forwarded to me by an Army chaplain during his service in Operation Iraqi Freedom. The ancient southern city of Ur is within what was during our war in Iraq the security perimeter of  the U.S. Army installation named Camp Adder. It was Tallil Air Base used by our forces until 2011. Originally it was an Iraqi Air Base built by Yugoslavians before 1985. In the military actions the structure was hit by small arms fire and there were explosions in the vicinity. There was much controversy after the First Gulf War that a nearby ammunition bunker site at An Nasiriyah released chemical agents from demolitions accomplished by our forces on the site. 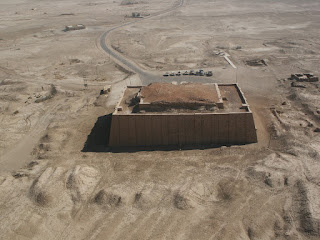 The Great Ziggurat of Ur was visible from the entire American military base complex. 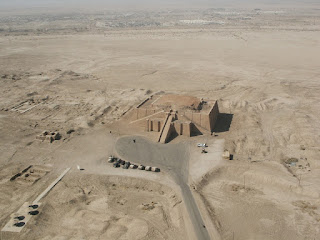 Nuzi: Then: Extensive archaeological digs (of the ancient city of Nuzi) in an area southwest of modern day Kirkuk, Iraq have uncovered many tablets which indicate cultural customs and laws that render credence to the Genesis accounts of the patriarchal period.

Now. Nuzi today is in the Kurd country of Iraq, in the northern part of Iraq. The Iraqi Kurds are in an oil-rich area of Iraq and according to a senior Army officer, who went to their areas during the war, basically operate as an area autonomous from the central Iraqi government. Their military forces are called the Peshmerga. There are millions of Kurds residing in Iraq, Iran, Syria, and Turkey, where their political presence is reflected in a military organization that carries out terrorist attacks against the Turkish government. Southwest of Kirkuk is Tikrit, where on Dec. 13, 2003 Iraqi president Saddam Hussein was pulled out of an underground hole and eventually executed.

Nineveh: Then: Nineveh in Northern Iraq was a major city in ancient times possibly founded as early as 6000 BC. There are numerous historical references to Nineveh throughout history much less as related to the story of Jonah and the whale. There is some speculation that the Hanging Gardens of Babylon were in Nineveh.

Now: Nineveh was located literally across the Tigris River from Mosul, Iraq which was overtaken by ISIS forces in 2014. Iraqi forces are in the midst since October 2016 of retaking the city. A personal report came to my attention and parts of it are related herein. "Now on the campaign against ISIS, the Iraqi Army has a foothold in Eastern and Southeastern Mosul, a city of over one million that stretches from the plains of Nineveh to the east across the Tigris River.   The Iraqi Army is pushing ISIS back block by block in bloody street battles using tanks, armored cars, Humvees, and coalition air support. But the Iraqi Army's main weapon are brave men who risk their lives daily to fight for the liberation of Mosul and take care of each other and the population....During ISIS attacks Iraqi soldiers shielded the civilians and exposed themselves to direct fire as they attempted to stop the ISIS attack....The Iraqi soldiers have done a courageous job of holding back ISIS (which launches its attacks from a network of tunnels, rat holes, suicide vehicles and IED's). Thousands of years after ancient Nineveh was the scene of ferocious fighting by empire after empire, it has not stopped. There is still fighting going on.

PRESUMABLY AS PROPHESIED IN THE BIBLE THERE WILL CONTINUE TO BE CONFLICT WITH DEATHS AND SUFFERING FOR MANKIND UNTIL JESUS' SECOND COMING. ONLY THE DEAD HAVE KNOWN THE END OF WAR.

Afghanistan: Our other war zone where Americans were sacrificed was Afghanistan, which was not conquered by the British in the nineteenth century, nor the Soviets in the twentieth century and is still a battle zone albeit with less American military presence. In a conversation once with an Army Special Forces warrior, who had served in both Iraq and Afghanistan, he related to me some compelling comments about the contrasts he observed between the two countries. In Iraq a much more educated population has allegiance to a central government, whereas in Afghanistan a much less educated population has allegiance toward tribal units. Several years ago there was a published report that Afghanistan sits upon significant mineral riches. It is rich to an extent that the Chinese have begun exerting influence to extract these deposits. I had a conversation with a military veteran of Afghanistan who indicated he had had a personal conversation with a tribal chief who revealed he had "sold" the mineral rights in his tribal area to a Chinese entity. As a "visceral" Vietnam veteran I maintain that, if the Chinese are going to enrich themselves on the spoils in Afghanistan upon our final departure, then it is a travesty of justice. It is assured that their rules of engagement in combatting the Taliban will be substantially less strict than ours have been while we have made our sacrifices in bringing freedom to the Afghans.