by Allen B. Clark    allenbclark@aol.com

Hopefully this that follows will be viewed as more than just "what I did on my summer vacation."

Before any trip that Linda and I commence we pray for "Divine Encounters." These do not necessarily relate only to spiritual situations, but also to personal situations in meeting individuals or unique circumstances. Our recent cruise to England and several days there was no exception to the answers by our Lord to our prayer. We signed up for this cruise because there would be World War II veterans on the cruise making presentations on their experiences in WWII. They were sponsored by the The Greatest Generations Foundation. All were 94-98 years young.

Last spring for my West Point reunion we utilized a private car service for the journey from the airport to our Manhattan hotel. Our driver had been a Vietnam veteran also, a soldier with the South Vietnamese Army, who had escaped after the war and eventually came to the U.S., where he married a Christian and is father to two college grad children. He is a Buddhist. We related very well. On this trip, of 100 or so drivers for the car company, he was again assigned to drive us. When he arrived to pick us up, there were warm embraces of him by Linda and me as we reconnected.

Before we even departed New York harbor from the Brooklyn Cruise Terminal, we were on deck looking across the harbor to Governor's Island and the Statue of Liberty and observed an older couple being videotaped. I heard "seventieth wedding anniversary" and Linda and I commenced to introduce ourselves and we struck up a conversation. Our new fellow shipmate was a D-Day and Battle of the Bulge veteran with his wife, daughter, and son-in-law accompanying him. We visited several times during our Atlantic crossing and will remain in contact. It is not a surprise that I connected closely with an affinity and respect for him that was mutual.

On our Queen Mary cruise last year I had attended the Sunday worship service and met a Nicci Pugh from England, who asked me if I were an amputee, after she observed my challenge in rising up from an armless chair. We discovered she had been a British Naval Nursing Sister on the hospital ship Uganda in 1982 during the Falklands War. She cared for the amputees on the ship during the hostilities. We also discovered she has the same surname as Linda's maiden name. She came to visit us on our trip to England after this cruise and gifted me a copy of the book she wrote, White Ship-Red Crosses, an engrossing book about personal stories of the wounded in action from the Falklands War. If anyone is interested in obtaining the book, email me and I will put you in touch with her.

We visited Exeter Cathedral and were there only one day and were able to enjoy a stirring event wherein the Royal Coldstream Guards band presented a concert the sole evening we were there. 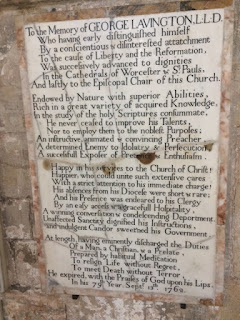 Would that any of us be memorialized in such a remarkable way as was this man at Exeter Cathedral.

A few days before the commencement of our cruise I was with my daughter in Austin and we met an Englishman at an Austin hotel. I told him I was traveling to the Exeter area in Cornwall after our upcoming cruise. He stayed in touch with my daughter and obtained my telephone number. He has been involved in the entertainment industry and has managed rock bands. We were in Dartmouth, England and returning to a certain town after a train ride. Before our departure, I received a call from him asking me about my trip and inquiring as to whether we had already come and gone. I told him in fact we were still in England and would be arriving in 30 minutes at a certain station. He said he lived in that town. As it turned out he was shopping 200 yards from our destination train station and greeted us when we arrived. He is working on a show in the U.S. for a band and asked us to attend, if it is scheduled.

For two days we stayed in Chepstow, a town on the eastern edge of Wales, in a hotel that for several hundred years was a private mansion and estate. Get this! There was an active parish church next to the entrance, steps from checkin, so it was the first place ever on a vacation that we were able to begin and end our touring days with prayer in a church that was hundreds of years old!

On of the major destinations planned for this tour was Moriah Chapel in Loughor, Swansea, Wales. This was the site in 1904-1905 of the Wales Revival. It was initiated by Evan Roberts, a man of very modest means, who worked in the coal mines. It was at this home church of his that the Wales Revival began and thousands and thousands of people through services at Moriah and other churches in Wales came to faith in the Lord Jesus Christ as Savior. Weeks before our trip I contacted the church secretary and indicated we wished to worship at Moriah on Sunday August 5 and be their guest. My schedule changed and it looked as if we could not attend that day. The secretary messaged me a few days before the 5th to check on our visit. I told her there was a complication for my itinerary, but that I would contact her Aug. 3 to confirm our plans. I had by that time contracted a cold and told her we would not visit. We woke up in Cardiff on Sat. Aug 4 and Linda said, "Let us go to Moriah." I emailed my contact and had not heard back by the time we went there by train and were at the church with the taxi idling to take us back from the locked-up church. We were about to go back to the train in the taxi when a message was texted and she said she could come and open the church in an hour. We sent the driver away and awaited her arrival. A young man also showed up unannounced to the secretary, when she arrived to open the church for us.

As it developed he was a recent convert to Christianity from an Indian faith group and literally drove to Moriah from northern England to visit the church, but had no appt. as did we. (We have stayed in contact). He joined us and in the church we prayed for another revival and a return to the faith, which is lacking in their community as exemplified by very low church attendance. The secretary told us two special anecdotes: 1. That thousands of the converts in the Revival were Killed in Action during World War One and obviously were able to know of eternal life upon their demise and  2. The Revival changed the communities and whereas previously, the miners would get off work, and before going home, would congregate in the pubs and spend the money needed at home for food and clothes. With the changes manifested in the new converts, the pubs closed and the police had nothing to do in those communities! 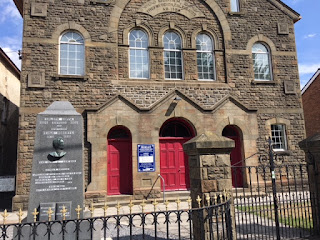 This is the memorial to Evan Roberts outside Moriah Chapel.

A dear Dallas friend of ours, when we described our encounters recently, told us she had also prayed for us for 'Divine Encounters." Prayers were answered in incredible fashion!