Some veterans with post-war memories experience what are termed "triggers." For some Vietnam veterans it is loud noises that cause a startle response, the whirl of helicopter blades, or car backfires. For some recent veterans it can be as seemingly innocent as driving past street-side trash cans that in their war the enemy rigged with explosive devices.
Triggers for everyone may be past birthdays or anniversaries, good or sad, for deceased parents or loved ones, past loves, losses, or friendships. June 17 each year is my most poignant trigger.
June 17, 1967 became my ultimate emotional trigger and my "Alive Day." A North Vietnamese regular army unit the night before had set up mortar and rocket firing positions across the river from our Special Forces camp and began an intense heavy barrage at  5:30 AM. I was on duty as the camp's Special Forces man assigned to the last two hour alert shift for the night in our inner perimeter with my safe departure from the camp to have been four hours later. It will always be a mixed positive and negative torrent of memories for me. The positive, because I remained in the open, instead of seeking cover in a bunker, to call upon our own mortars to return fire and shoot flares into the dark sky. The negative, because that choice, placed me in the line of enemy fire with the devastating consequence of taking below my knees the full blast of shrapnel spread out from a mortar round landing to my left rear, causing both legs eventually to be amputated below the knee cap.
Often each year and especially on my "Alive Day" when I awaken, the vivid and horrifying memories of that turning point in my life invade my mind and emotions. In my church service today I teared during the hymns and prayers with sadness and recollections of the six of the other eight wounded in the attack (especially combat medic Jimmy Hill), some, who had attempted to help me or carried my litter. I had planned on going to the coffee hour, but in the exit line, Linda told the minister, who also was a Vietnam veteran, that it was the 51st anniversary of my wounds in Vietnam and I lost it. Linda and a high school sophomore, who at my suggestion is considering attending West Point with a career path to becoming an Army emergency care physician, walked me toward my car. I must admit some of my immediate emotion was due to what I knew she would face in her planned future career.
Thankfully, very few ever experience such a traumatic bodily "Alive Day," but, 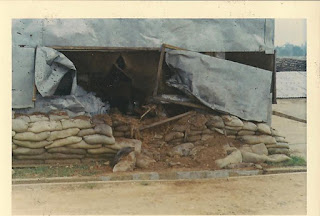 later in life, by the grace and mercy of God and His Son Jesus, the Christ, I had and have my very positive and uplifting spiritual "Alive Day(s)" that really was and continues to be over many days, and now decades. It became and can be, the day(s) when we know without a doubt, that the only real essence of life is the spiritual, not the physical. In my Christian faith tradition I focus on the blessings that I know my final residence will be in Heaven, because I believe that Jesus died on that cross at Calvary in Old City Jerusalem and paid the price for the forgiveness of all my sins and ensured me the final gift of eternal life. Every day has become my "Alive Day" that I lived and will die as a child in the Family of God. (Photo above indicates how devastating was the damage of the enemy rounds. I was wounded to right of this spot.)
Posted by Allen B. Clark at 8:24 AM